The Science Behind FAST and splitfast

Our technology is continuously fueled by the expertise detailed in our academic papers, published and discussed in international journals.

FAST AT A GLANCE

FAST and splitFAST of The Twinkle Factory enable the specific fluorescent labeling of any protein of interest (POI).  The protocol is based on the instantaneous formation of a fluorescent molecular assembly between the small (14 kDa), genetically encoded, protein tag FAST and various fluorogenic ligands (TFFluorogens).

Furthermore, FAST does not require molecular oxygen for being fluorescent, unlike fluorescent proteins.  FAST can hence fluorescence label proteins in weakly oxygenated or anaerobic environments.  This is helpful for mature biofilm imaging, or for any anaerobe imaging, e.g., Clostridium. 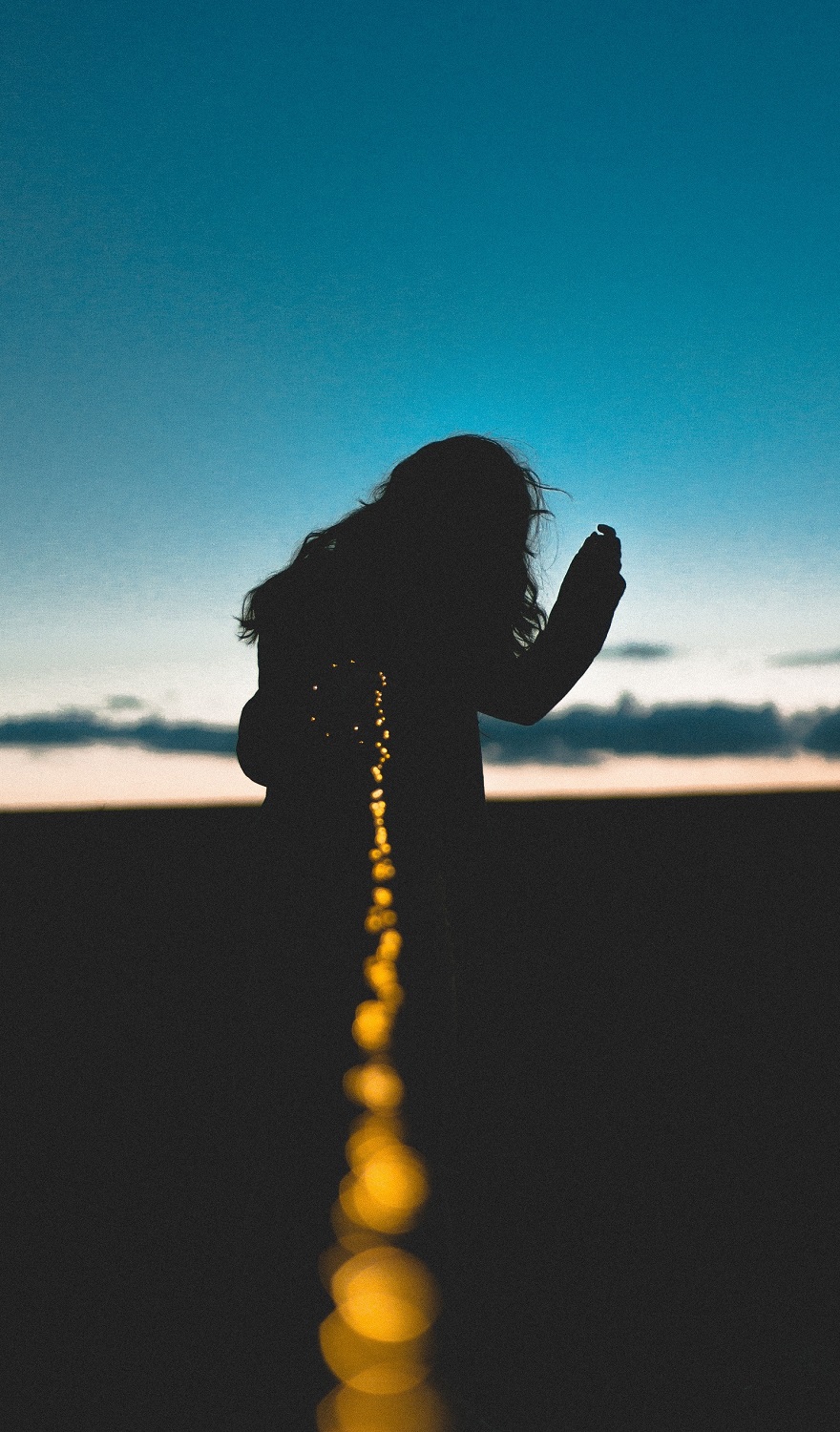 Using different TFFluorogens, one can tune the spectral properties of FAST-tagged proteins without one single protein tag.  This hence provides an experimental versatility not encountered with fluorescent proteins. 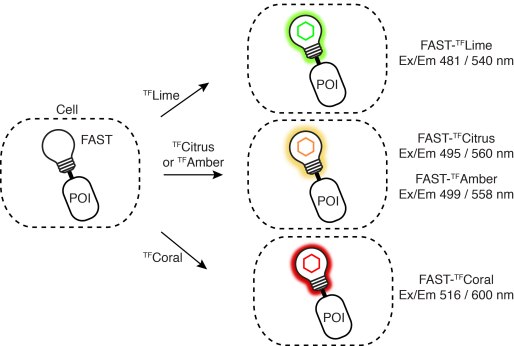 Furthermore, labeling of FAST-tagged proteins can be restricted to the cell surface excluding inner proteins.  It indeed now exists  TFFluorogens unable to cross the cell membrane, e.g., HBRAA-3E or tfAmber-NP.  One can hence study protein trafficking at the membrane with various fluorimetric techniques, even including non-imaging flow cytometry.

1/ cloning and expressing the FAST-tagged protein, and

2/ labeling the resulting fusion with the TFFluorogen of choice.

Note that proteins of interest can be expressed with FAST as either an N- or a C-terminal fusion.

Dr. Arnaud Gautier and Dr. Alison Tebo from ENS (Paris, France) report in Nature Commun. the development of splitFAST, a fluorescence complementation system for the visualization of transient protein-protein interactions in living cells. Engineered from the fluorogenic reporter FAST (Fluorescence-Activating and absorption-Shifting Tag), splitFAST displays rapid and reversible complementation, allowing the real-time visualization of both the formation and the dissociation of a protein assembly. The paper discloses various applications of splitFAST: interaction between a membrane protein and a cytosolic protein, interactions from the MAPK signaling pathway, real-time monitoring of the MEK1-ERK2 interaction, real-time monitoring of transient Ca-dependent interactions, apoptosis biosensor.

Beyond FRET and BiFC

Conventional imaging techniques for protein-protein interactions encompass Föster Resonance Energy Transfer (FRET) and bimolecular fluorescence complementation (BiFC), the latter being found easy to implement, straightforward to interpret, and less sensitive to the relative levels of the two interacting proteins. Now, in contrast to BiFC, splitFAST complementation was shown fully reversible and disassembly rapid, which allows not only the real-time monitoring of protein complex assembly but also the real-time monitoring of protein complex disassembly. This unprecedented behavior opens exciting prospects to study the role and function of protein-protein interactions in various cellular processes and dissect complex interaction networks.

splitFAST works with the classical fluorogens of The Twinkle Factory, reflecting the versatility of this breakthrough fluorescent reporting system.

greenFAST / redFAST labeling seems particularly promising for dynamic recording in vivo. The authors apply it to the FUCCI (fluorescence ubiquitination cell cycle indicator) in mammalian cells and in zebrafish embryos. In the latter, it allowed exquisite monitoring of individual nuclei from the 256-cell stage through to the tenth cycle. In addition, fluorescence recording of the whole embryo revealed proliferation patterns and asynchronic division as early as 256 cells. Detailed analysis of cell cycles as short as 15 min and as early as 3.5 hpf is only possible with quasi-instantaneous fluorescence as provided by FAST and its variants.

splitFAST, earlier published in Nature Communications, is the only reversible fluorescence complementation reporter with rapid association/dissociation kinetics. Aiming breakthrough biosensors capable to report sequential or multiple protein interactions, the authors have hence developed split tags, namely split-greenFAST and split-redFAST. To illustrate their potential, they have tracked the formation of FKBP-FKBP dimers mediated by AP1510.  And further, their exchange to FRB-FKBP dimers upon the addition of rapamycin.

They have thus proven the ability of split-greenFAST / split-redFAST to deliver facile readout of multiple or sequential protein interactions with good contrast and temporal resolution.

The latest FAST variant is frFAST designed together with the fluorogen HPAR-3OM, a.k.a. tfPoppy, for far-red labeling.  Published by Prof. Arnaud Gautier in Angew. Chem. Int. Ed. 2020.

The high demand for RFP, and furthermore far-red fluorescent proteins, has emerged from the need for new colors.  Indeed the growing use of optical biosensors and optogenetic tools obstruct the spectral window available for biological imaging.  Moreover, far-red fluorescent proteins allow imaging deeper in tissues.  Indeed, autofluorescence, light scattering and absorbance by endogenous molecules is reduced in the far-red region.

This paper discloses a far-red system, frFAST and HPAR-3OM, engineered from the original FAST tag and HBR-based fluorogens.  HPAR-3OM is a membrane-permeant fluorogenic ligand which selectively binds frFAST-tagged proteins.  It works in solution, in living cells or in fixed cells.  HPAR-3OM is almost non-fluorescent when free in solution.  But it strongly fluoresces when bound to frFAST.  Gautier designed HPAR-3OM together with a variant of FAST, frFAST, specifically for far-red labeling.  frFAST and HPAR-3OM allow for imaging proteins in mammalian cells, but also in zebrafish embryo/larvae and chicken embryo.  Gautier eventually developed a rapid and reversible split-frFAST to image protein-protein interactions in live cells.

Since the seminal PNAS in 2016 by the team of Arnaud Gautier, from the first enthusiastic mention in 2018 by Terry Papoutsakis of University of Delaware, navigate the fascinating journey of FAST adoption and buildup towards The Twinkle Factory community.

Papers by The Twinkle Factory team